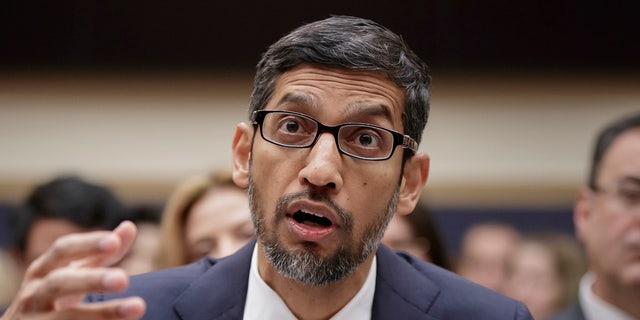 Also at that Oct. 28 hearing, Facebook CEO Mark Zuckerberg and Twitter CEO Jack Dorsey struggled to name a single liberal person or entity who has been censored by their social media platforms.

Twitter and Facebook have both been accused of bias against conservatives, so Sen. Mike Lee, R-Utah, asked Zuckerberg and Dorsey to name “one high-profile person or entity from a liberal ideology” who has been censored or had actions taken against them.

“I can get you a list of some more of this but there are certainly many examples that your Democratic colleagues object to when… a fact-checker might label something as false if they disagree with it, or, um,” Zuckerberg said before he was cut off.

“[Our] January 20 article stated that Google was suppressing in its search results the highly popular articles published by the World Socialist Web Site on the New York Times Magazine’s much-publicized racialist falsification of American history called ‘The 1619 Project,'” North wrote.

The site’s articles were “read by hundreds of thousands of people around the world” and had backlinks to “major online publications such as the Wall Street Journal, the Atlantic, National Review and the Daily Signal,” North wrote.

“However, in searches for the ‘1619 Project,’ this content was being pushed by Google deep into its link results,” he wrote. “In the context of the hearing, [Pichai’s] cryptic reference to Google working ‘in a non-partisan way’ may be interpreted as an attempt to justify your company’s censorship practices by claiming that they are applied against both left-wing and right-wing web-based publications.”

“There are some examples that predate the 1619 Project entirely,” a spokesperson for Google told Fox News when asked if Google only censored the World Socialist Web Site when it was critical of the 1619 Project.

The spokesperson cited a 2017 New York Times article in which North complains of censorship and accuses Google of “deliberate intervention.”

Fox News’ inquiry to the World Socialist Web Site was not returned at the time of publication.