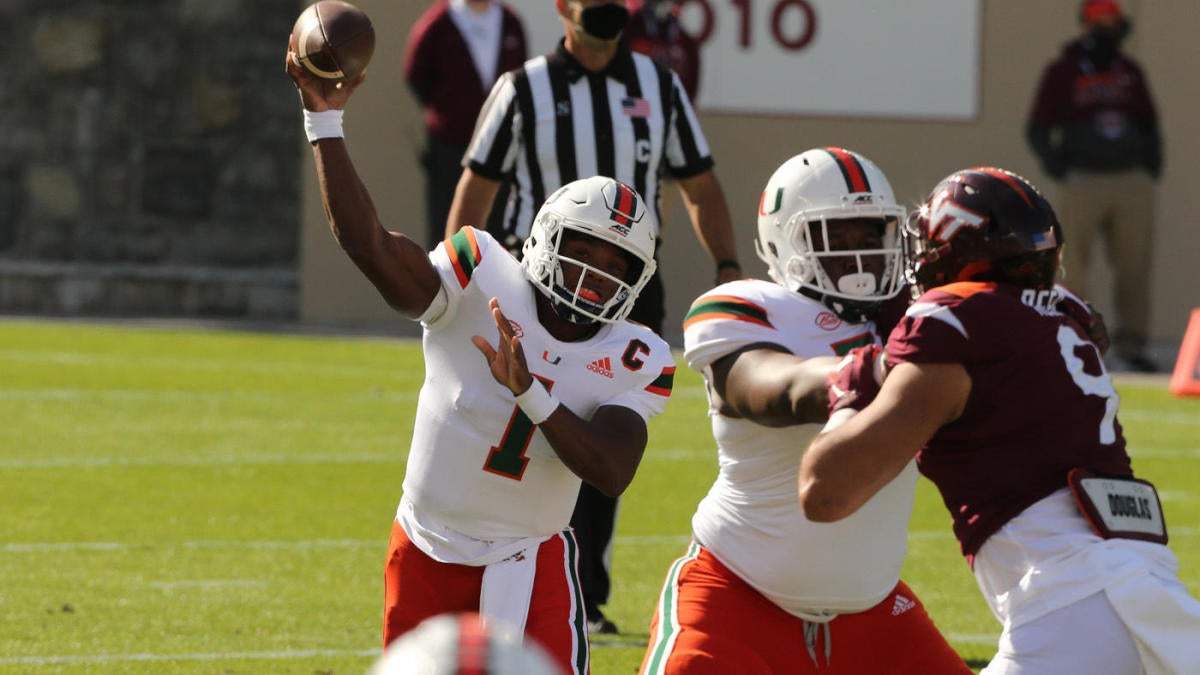 Miami (FL) quarterback D’Eriq King transferred from Houston to show his skills on the big stage and contend for the College Football Playoff. For the second straight week, he orchestrated a second-half comeback to keep the Hurricanes in the mix.

King threw for 255 yards and one touchdown, and also found the end zone on the ground en route to a 25-24 win. Down 24-13 late in the third quarter, King and the ‘Canes embarked on a 13-play, 75-yard drive that ended with a 6-yard touchdown run by Cam’Ron Harris. King threw for 48 yards on the drive to swing momentum back to the orange and green. He then led a 10-play, 82-yard drive that culminated with a 36-yard touchdown to Mark Pope on a run-pass option over the middle for the game-winning touchdown.

This all came one week after he orchestrated a 10-point, fourth-quarter comeback to top NC State 44-41.

What did we learn about the Hurricanes and Hokies on Saturday afternoon in Blacksburg? Let’s take a look.

1. This is old-school Miami

King got together with first-year offensive coordinator Rhett Lashlee with one goal in mind: make Miami fun again. The two have come through in a big way. The stats don’t show it this week, but watching the offense click in the second half — particularly those two long scoring drives that proved to be the deciding factor in today’s win — was old-school, high-octane Miami football that felt a lot more like the good ol’ days when the ‘Canes were at the top of the college football world.

When Lashlee cranked up the tempo in the second half and King got the run-pass option game going, it was all over. Panic set in, and the Hokies had no shot. That’s what this offense can do — flip a game in the blink of an eye. King is the engine, Lashlee provides the fuel and Harris provides a little dash of fuel injection to make this machine hum. Harris only had 63 yards on the ground, but the balance he provided throughout the game played a big role in the comeback.

This is a program that hasn’t finished higher than 12th in the ACC in total offense since 2017 and barely even topped the 400-yard per game mark when it finished seventh that season. That should never, ever happen at Miami, an area that has more high school talent than any other region in the country. This new-look Miami offense has changed the identity of the program.

When the defense smelled blood, it attacked. You felt for Hendon Hooker as Virginia Tech’s star quarterback had no shot.

Miami had six sacks for 37 yards, 2.5 of which came from UCLA transfer and former blue-chip prospect Jaelan Phillips, and brought unrelenting pressure on Hooker in the second half of the comeback. What’s more, Phillips provided four tackles for loss and was clearly a big-time concern in the second half to a point where Hooker was looking at him more than his receivers after Miami got the lead.

Phillips is finally living up to the hype. The No. 1 overall player in the Class of 2017 only had eight tackles for loss in two years with the Bruins before transferring, and was considered more of a bust prior to this year. He now has 16 tackles for loss and 8.5 sacks in eight games, while making himself very attractive to NFL scouts.

Justin Fuente came to Blacksburg in 2016 with one goal: bring back the glory days of Frank Beamer. Is there anything to suggest that he’s up for that challenge? Not really. Saturday’s loss is another bullet point on what is becoming an increasingly sad resume. The Hokies now sit at 4-4, have lost two straight (including another home loss last week to Liberty) and hasn’t had a double-digit win season since he posted a 10-4 record in his first season at the helm. The program has also lost seven straight games to top-10 opponents.

To put it more simply — the program is stagnant.

Virginia Tech isn’t Nebraska. It isn’t a program that had glory days, but doesn’t exactly fit into the current college football landscape. It should be better than this. There are going to be recruiting challenges; that’s the reason Virginia Tech is ranked No. 7 in the ACC in the 247Sports team-talent rankings. But Beamer made it a force because of player development that doesn’t seem to be happening under the current regime.

Fuente isn’t following through on his end of the bargain, which is a big reason why, at its best, Virginia Tech is an eight-or nine-win program in non-COVID-19 seasons.